OVER THE EDGE–Murder Returns to the Caribbean 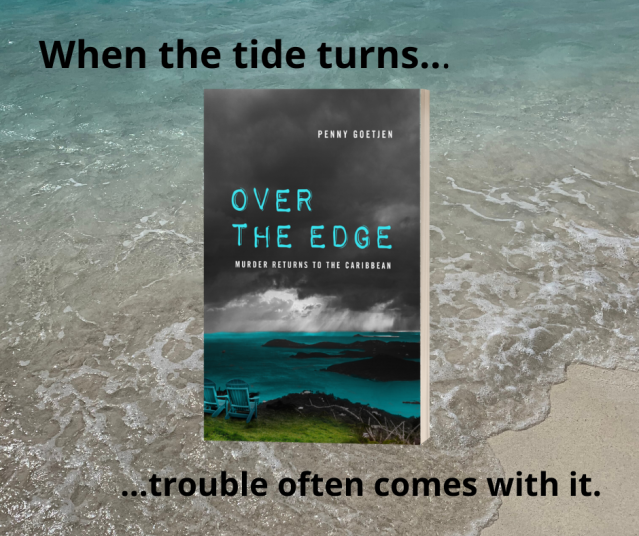 On this trip to the Caribbean, don’t expect an umbrella in your drink.

Returning to the tropical breezes and turquoise waters of St. Thomas to rebuild her mother’s bungalow after it was destroyed by arson, Olivia is shaken by the extensive devastation wreaked by a Category 5 hurricane that recently ripped through the Virgin Islands.

After an exhaustive search for Colton, her on again/off again love interest from her previous visit, she’s left with more questions than answers, his whereabouts unknown.

With nowhere to stay, she accepts the offer from an older, wealthy man to house-sit his spacious villa overlooking the Caribbean Sea while he sets off on an extended sailing trip.

What seems like a perfect arrangement turns into a nightmare. Before she can unpack her suitcase in the posh digs, Olivia stumbles upon the man murdered in his own home and becomes the prime suspect.

MURDER RETURNS TO THE PRECIPICE

Elizabeth Pennington returns to her roots on the coast of Maine with her love interest Kurt Mitchell to reopen her family’s historic inn, which she lovingly restored to its New England charm after a powerful hurricane nearly destroyed it. Unseen forces, however, seem hell-bent on derailing her efforts, or worse—taking her out of the picture.

The untimely death of a young female guest in the inn’s fitness center appears to be a tragic accident until authorities investigate and find there is more than meets the eye. When a second body is discovered, Elizabeth fears the worst—a killer in their midst—and wonders if Kurt’s FBI past has caught up to him.

“Murder Returns to the Precipice is brimming with promise and peril—a richly textured mystery that’s both charmingly atmospheric and cunningly staged. Be forewarned: Like the coastal waters of Maine, this story will lull you in with its seeming tranquility only to sweep you away in the undercurrent. Take a deep breath and surrender yourself fully. Penny Goetjen is a mighty force!”

“An endlessly delightful tale and band of characters…”

“…suspenseful, intriguing, and edge of your seat…”

MURDER BEYOND THE PRECIPICE

In her follow-up to Murder on the Precipice, Penny Goetjen delivers another riveting tale in Murder beyond the Precipice.

The Livingston family is no stranger to tragedy. Losing both parents at a young age in what authorities ruled an accident, Lucretia Livingston, the sole heir to the estate, is left to pick up the pieces. But many locals question the circumstances surrounding their deaths and if the family’s wealth was an irresistibly seductive motive for crossing the line.

Elizabeth Pennington returns to the coast of Maine after receiving an unexpected wedding invitation. Hoping to surprise her friend, she arrives unannounced at the Livingston Estate-turned-inn, only to discover no one knows her whereabouts. Just as disconcerting is the disappearance of the innkeeper’s young bride, Lucretia. Frantic for answers, Elizabeth becomes tangled in a tortured trail of deception, betrayal, love lost and murder.

“Goetjen is a competent writer who keep things moving along, throwing in hints of the preternatural that add to the overall ambiance. . . .worth a read.”

“Filled with colorful characters who make an interesting mix, the mood of the tale can suddenly go from sunny and breezy to dark and terrifying. Murder beyond the Precipice is a fun, captivating mystery.”

“Beyond the whos and whys (which are wholly satisfying), Penny Goetjen delivers an evocative novel that transports readers to the coast of Maine, which is rendered as vibrant and volatile as the characters who breathe its salty air. Invigorating, and not to be missed!”

“Hard to put this book down. The twists and turns and intrigue never stop. . . . A must-read for murder mystery fans.”

MURDER ON THE PRECIPICE

“Penny Goetjen uses the idyllic setting and island culture so effectively, the reader is tempted to savor ocean views from The Empty Chair, but don’t pause too long–danger is never too far away.”

—Kathryn Orzech, Author of Premonition of Terror, a paranormal thriller, and Asylum, a dark suspense saga